Japan-based mobile-game maker, DeNA is introducing a new Pokemon based mobile-game Pokémon Masters game. Featuring the pocket monsters and anime stars, the game features 3-on-3 team battles. The game is now available to download for free for both Android and iOS, after over a month of pre-registrations. However, your smartphone should have at least below-mentioned specs to run the game:

Some of the Android users are facing a problem to download the game from Play Store. Even having the recommended specs on the device, Play Store showed “Your device isn’t compatible with this version,” note when they tried to download the Pokemon Masters app. 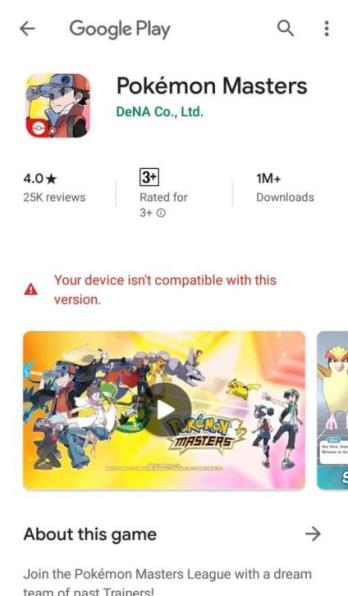 Well, you should read the description mentioned on the official website of the game. According to which, the functionality of the game on all devices is not guaranteed. It’s not clear what the game developers are trying to point out. And for now, we can’t comment on the issue, but we will keep you updated. Stay tuned.